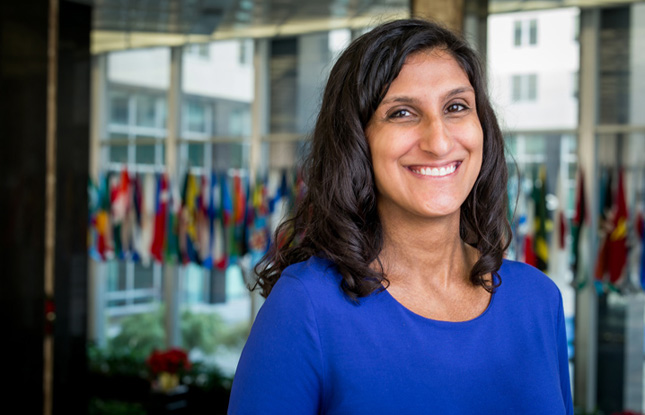 The Wisconsin Alumni Association recognizes eight alumni under the age of 40 who are leveraging the benefits of their UW education to better their cities, states, nation and the world. One of these outstanding citizens is an IS Major alumni.

Neha Sheth Lugo decided early on that a UW degree would take her places.

Lugo, a Madison native, created her own world-class ticket with a major in international studies and a wealth of globetrotting as part of her UW degree. Today, she’s touched down as an attorney in the U.S. Department of State, where she provides legal advice regarding policies that affect people and places all across the planet. “All I knew was that my career would have some global perspective through which I could experience the world,” Lugo says.

As an undergraduate researcher, she wrote an award-winning thesis on French foreign policy during the Rwandan civil war and genocide. She earned L&S honors and packed her UW studies with international experiences — courses in French, Spanish, and Hindi; study abroad in Aix-en-Provence, France; and Oaxaca, Mexico; and an internship in the United Kingdom’s Parliament.

She went on to earn her law degree at Harvard Law School, completing field work in Nepal and serving as editor-in-chief of the Harvard Human Rights Journal. She is an adjunct professor at Washington, DC’s Georgetown University Law Center.

Lugo says she’s found her “dream job in public service” at the U.S. State Department, where she has been since 2010. In her second position there, with the Office of Human Rights and Refugees, she provided legal advice regarding women’s rights and refugee admissions, and served as a U.S. representative to the UN General Assembly and the UN Commission on the Status of Women.

Today, Lugo is an attorney for the Legal Adviser’s Office of Oceans, International Environmental and Scientific Affairs. She works on U.S. conservation efforts, including multilateral treaties that protect the marine environment, prevent wildlife trafficking, and promote biological diversity and global food security.

“I love my job, which allows me every day to take part in decisions that advance U.S. foreign policy and, I believe, the common good,” Lugo says.