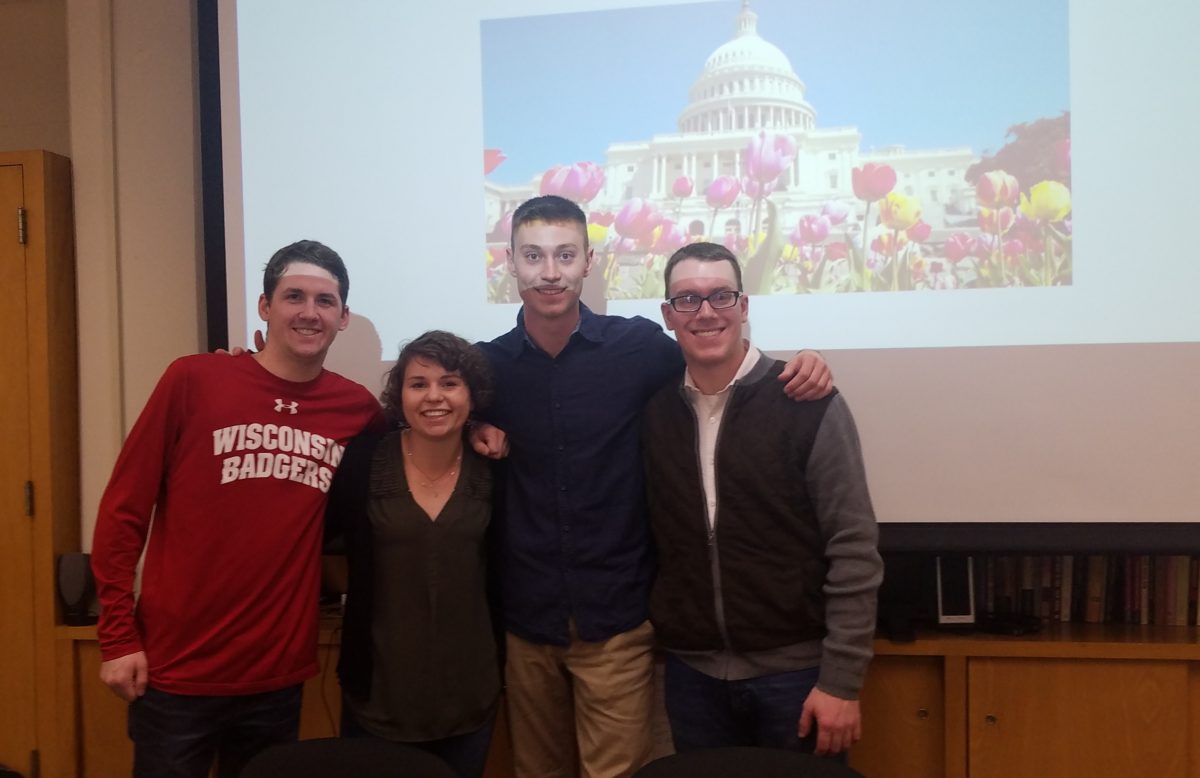 Wisconsin in Washington D.C. (WIW) is an academic internship program combining near full-time internships, UW coursework, arranged student housing and activities, front-end assistance in gaining internships, and engaging with UW alumni in D.C.. Fall and Spring Semesters are 12 credit programs that provide direct UW course equivalents and match the regular campus calendar. Summer term is a shorter, 8 week program offering 3 credits of coursework. Scholarship opportunities are available through IAP and some academic departments. About half of D.C. internships offer some payment.

Besides internship opportunities, the program provides much more:
– Bonding with a cohort of 25 UW students
– Living in the center of Capitol Hill among communities of interns from all over the world
– Program faculty and a D.C.-based director located in D.C.
– Supportive alumni in a range of professional fields
– Access to exclusive site visits, briefings, and events each week
– Both international and domestic program tracks

Each cohort of WIW students contains about 50% of students studying and interning at international-related internships, including…

Why did you choose to go to D.C.?
“I wanted to get a job, and it worked; I’m getting fully employed.” says Jenni Geurink.
Andrew H.: I think it was a good way to get out of my comfort zone. I don’t like to get out of my box much. Part of the reason that I did this was because I wanted to throw myself into a new situation, which I did. The cool thing about D.C. is that there’s always something happening. Even when we go out for a walk, we run into some kind of rally. The city is neat, and we always had something to do. I was there for 8 weeks, and I didn’t get to do nearly everything I wanted to. That’s how much stuff there is to do there. I’m kind of ‘history geek’ so I enjoyed museums and old sites.
Nate: I had always been interested in politics and policy, and D.C. was kind of natural thing, or else you haven’t lived. It was really cool to work as a team with DSCC. And the city, too; there is always something to do and places to go. The food scene was amazing. It was a fun thing for me to try out new restaurants.
Andrew S.: Going out to D.C. was something that I wanted to do because it got me out of the Midwest. Being a Political Science major, it didn’t feel right to graduate without some sort of D.C. experience. Getting out to D.C. added some ‘oomph’ to the Political Science major, and gave me a real experience and real-world scenarios that you live in, where I could apply concepts from UW. It was cool to see hands-on learning. Washington D.C. in general is an awesome place to be; you really can just go anywhere at any time to try to do anything, or with nothing in mind, and find something to do.

What are your experiences with finding an internship, and with the class at UW?
“Keep it broad and go all in,” says Andrew Strother.
Jenni: Finding an internship is a hard process. I applied to 27, and heard back from 5; I got my internship a week before I left for D.C. That’s how it works in getting a job, too.
Andrew S.: Applying to this internship was the first time that I had to apply for multiple things at once. In terms of advice, apply early and often. If you see one place, learn about it and finish that application today. Had I waited any longer, I’m not sure if I would have found one.
Nate: You’ve got to trust the process. It is a low-risk way to do the test-run of getting it all together.

Were there any differences between going to D.C. on your own and going with a cohort?
Jenni: Yes. It was just like a squad. We all met each other there and still hang out. There was another intern in my office who came from UW by himself, and I ended up taking him to a lot of places. But he had completely different experience, especially in transition there. He didn’t know anybody until he met me and a couple of other UW students in Tammy’s office.
Nate: There was an instructor who would arrange events for us all the time. And that was a great way to have some sort of structure, and was one of those things that we all bonded over. Everything in D.C. goes so fast. Having that built-in structure is important because it adds to the experience; if there isn’t any structure, you’ll blink and it’ll be gone.
Andrew H.: I wouldn’t call it a safety net, but it’s nice to know that you have people around where at least you have one thing in common. First thing we did before we went out there was to make a GroupMe.

What about networking?
Jenni: The alumni connection is something that UW has that others don’t. We are suddenly connected with thousands of D.C. Badgers and hang with them. I haven’t had any experiences in other settings where I can call somebody just because they are Badgers, and they are more than willing to help you.
Andrew H.: Networking was actually one of the things that stressed me out. The thing about networking is that it is going to happen whether you’re trying or not.
Nate: Now, we have a network out in D.C. Couple of weeks ago, I followed up with everyone that I met in D.C., and sent them Happy New Year messages, being able to re-connect with those people; that helps obtain a job later.

Where did you intern, and what were your duties?
Andrew H.: I worked for Cheri Bustos. I really enjoyed working there. On typical day, there was some answering phones. Every once a while, I was asked to research on bills, and did a lot of capital tours. One of the coolest things I thought about working for Congress is that you get your own ID badge, which doesn’t sound like a big deal, but it gets you virtually anywhere in the entire capital building and complex.
Jenni: I was a Tammy Baldwin’s press intern. I ran her social media accounts, and learned how to run a CommShop, which was what I wanted to do.
Andrew S.: I was in the Constituency Department for Republican National Committee (RNC). It was a lot of fun. Answering phone calls was challenging in its own way, but it was nice to hear people in different levels of thoughts. It was a small office, and I only worked with two other interns, my boss and another staff. So we got to know each other really well. The standard day was a lot of answering phone calls, proof reading letters, and making sure that things that we send to constituents are correct, right and professional; and kind of filtering through the good and bad. Working with all the other interns in the organization puts a big perspective on what your part does in relation to the whole scheme. And carry your badge everywhere you go.
Nate: I didn’t even get a badge, so I’m kind of upset about that. Working at the Democratic Senate Campaign Committee (DSCC) was a great time. I have been always interested in politics, so it was cool to work on the campaign committee side, doing the research, fundraising, and strategy related to campaign. On the typical day, I had normal intern stuffs, like answering the phone, getting the mail, and doing database management. Also, I did a lot of research; having strong research skills was a big benefit. Being able to get in-depth with the issues and people is a unique experience because you get to see how the campaign works at the highest levels. The other big thing that we always did was help senators. I’ve met all the democratic senators except Angus Cane. It was cool to be able to interact with people you see on CNN or MSNBC 5 minutes later.

What do you think is the level of experience or knowledge that applicants must have about their chosen internship field?
Jenni: All of us were super intro-level. A Political Science major doesn’t necessarily prepare you with all of the unique skills, and it shouldn’t. It’s something that you learn on the job. So on my first day, I learned how to tweet, and they taught me how to write press releases. Applicants would have to have a solid understanding of politics and the general world, but everything that you’re going to be doing is what you’re going to learn on the job.
Andrew H.: What is key is having a good understanding of politics in general and the nature of current events. What I found is some of the best ways to get to know people is to just talk about those topics. We’d meet up after work and just argue over democratic politics for hours. I thought it was really cool way to relate to other people.
Andrew S.: Stay up on current events. Everything that happens in D.C. is the Right Now, and the next Right Now. That’s the world that you live in that affects what you do on a daily basis. Some interns from the RNC would go get some beer, and talk about RNC and Republican politics. So definitely keep up on current events and have an understanding of how those current events might play out or could play out. You can practice technical skills in D.C.
Nate: Know the players. Jenni gave me U.S. Senator Flashcards, and it’s the greatest gift that I have ever received. The U.S. Senate releases a hundred flashcards every session with every senator’s face, and where they are from. So I recommend those, but the important thing is to stay up with the current events. Having theoretical knowledge would be useful because you can build up what you are learning in the real world.

What are your plans for the future?
Jenni: I will be a campaign manager for Dane County Board. I will hopefully be moving to work with Tammy Baldwin in the future.
Andrew H.: I am going to work for Legislative Democrats in Illinois, assuming I get an offer. But I feel very confident about it. Beyond that, I certainly might want to move back out to Washington, and then maybe get into lobbying at some point.
Andrew S.: I have a different path. I am in Air force ROTC; so after I graduate, I will have about 6 months of casual status. From there, I will go to Texas to start that commitment. My experience in D.C. is what makes me want to go back eventually. If I am 15 years down the road and get a position at the Pentagon, I’m taking it.
Nate: My plan is to either work on the congressional or senate campaign, but I don’t quite know where yet. But going to D.C. definitely guided that process of where I want to work. I want to move back to DC and try out the official side of things.