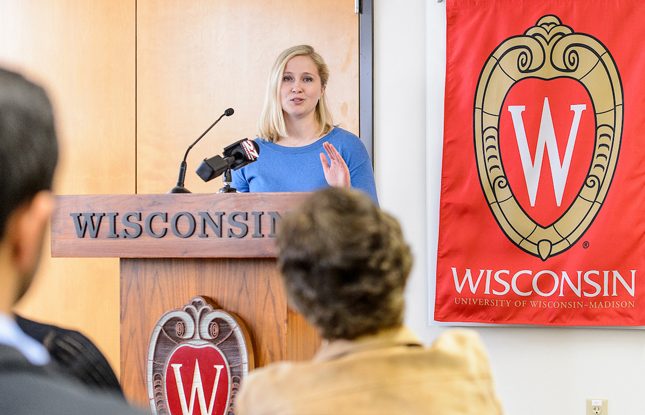 Claire Allen is ’14 UW alum with majors in International Studies and Spanish. She worked at Kimberly-Clark as an Export Analyst, and is now working at UW-Madison.

The connections I made at the career fair gave me a lot of good practice interviews before the Kimberly-Clark one. As someone who later attended the Career Fair as a UW-Madison recruiter with Kimberly-Clark, I have to say people that stand out the most are the people who are natural, conversational, and have a couple of quantifiable wins on their resume that they can talk about.

Could you introduce your position at Kimberly-Clark? What does export analyst do?

As an Export Analyst, I (along with my team) was responsible for all orders of Kimberly-Clark materials leaving the country. This included items like Huggies, Kotex, Cottonelle, Viva, and Scott that are being delivered to warehouses and stores all over the world. I also managed “raw materials” or materials used in mills to make products. Kimberly-Clark has mills stationed around the world and some of the raw material is sourced from the USA. Managing orders meant working with buyers to ensure our product was delivering as expected. It sounds straightforward, but events like labor strikes at ports, hurricanes, and material shortages could throw a wrench in the plan. Most of my day was spent managing orders through SAP as well as email, but occasionally through phone calls and virtual meetings as well.

How did you find out about the jobs at Kimberly-Clark?

I grew up in Neenah, which is the birthplace of Kimberly-Clark. My dad and several family friends worked there, so I had a lot of connections to help me get through the door to have the opportunity to interview.

Kimberly-Clark has really made a conscious effort to make work-life balance possible and to allow lots of flexibility for its employees. I enjoyed being able to work from home occasionally and to have a supportive manager who encouraged a positive work-life balance.

What was your typical day like at Kimberly-Clark as an export analyst?

Lots of emails, a few meetings to discuss problem areas or crises, and also some fun with employees like daily trivia or team lunches.

What resources at UW-Madison did you find useful?

I sadly didn’t get a chance to study abroad—I had planned to go to Spain for a semester junior year but it was cost prohibitive. Luckily, I had the opportunity to study abroad in Costa Rica in high school. I spent 6 months living with a local family and attending a local high school when I was 17. Studying abroad quickly made me gain self-confidence, become flexible, and become a strong Spanish-speaker. Spanish came in very useful at Kimberly-Clark when interacting with buyers in the Caribbean, Central, and South America.

I didn’t really participate in a specific student organization long-term, but the work experience I had as an employee was without a doubt the most useful thing I did outside of being a student. I worked in the SOAR program for 2 years and then in the Admissions Office. Both offices gave me invaluable customer facing, public speaking, and training experience.

I majored in International Studies and Spanish with a Certificate in Business. I’m really glad I added Business into the mix because it made me more well-rounded and gave me some credibility in my Kimberly-Clark interview. Beyond being useful for employment, it was great to see how a whole different part of campus operated that I hadn’t been exposed to as a purely L&S student. Finance 300 was very different from Spanish literature classes. Neither was better or worse, but they were very different from each other.

I attended the Career Fair both semesters during my senior year. The connections I made at the fair gave me a lot of good practice interviews before the Kimberly-Clark one. As someone who later attended the Career Fair as a UW-Madison recruiter with Kimberly-Clark, I have to say people that stand out the most are the people who are natural, conversational, and have a couple of quantifiable wins on their resume that they can talk about.

You are now working for the University. How did you make that decision?

Kimberly-Clark went through a restructure in the Spring of 2018 and offered all of its employees the chance to leave with payment and benefits. Ever since I was a student employee in the SOAR program here, I knew I wanted to come back and work for the University. So when I was offered money and benefits to leave it was a no-brainer. I left Kimberly-Clark the first week of May and travelled for 3 amazing months. I spent 2 weeks in Ireland, 2.5 weeks in Spain and Portugal, a week on the Lakota Reservation in South Dakota at a graffiti jam, a week in Paris and a week in Croatia on a swimming trip. Sprinkled in there, I got to spend a lot of time with family and just soak up summertime in Wisconsin. Sadly, all good things must come to an end—but now I’m thrilled to be employed in the Office of Compliance! And being back in Madison is also fantastic.

Which office at the University are you working in? What is your position/tasks?

I’m a Program Assistant in the Office of Compliance, which falls under Vice Chancellor for Legal Affairs Ray Taffora. I help with rolling out campus-wide Title IX and HIPAA training. I also help with other issues that may arise regarding Title IX, Equal Opportunity, or HIPAA. I’ve only been here for a month, so I think I’m still learning what my job is as I go, but so far I’ve really enjoyed the variety of responsibilities and people I get to work with! The job is opening my eyes to a whole world I was pretty unaware of as a student—it is such an important office for both the student and the employee experience at UW-Madison and I’m honored to play a part in it.

What is your next step?

Buying a couch? Haha, I’m still settling into my new Madison life as a working professional vs. as a college student. Madison has so much to offer beyond the borders of campus! When I decided to relocate to Madison and work for UW-Madison, part of my decision was based on my desire to go to graduate school part-time for a Masters in Student Affairs, so I may start pursuing that in the near future!

–
Interview written and conducted by Soeun Lee, a Communication Intern in the IS Major Office.