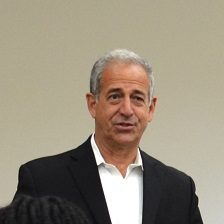 Russ Feingold served as a U.S. Senator from Wisconsin from 1993 to 2011 and as a Wisconsin State Senator from 1983 to 1993. Most recently, he was a Visiting Lecturer in Law and Martin R. Flug Visiting Professor in the Practice of Law at Yale Law School. Feingold graduated from University of Wisconsin-Madison with a B.A. in Political Science in 1975. He also holds a B.A. in Jurisprudence from the University of Oxford as a Rhodes Scholar, and a J.D. from Harvard Law School.

Feingold has long been lauded as the Senate’s leading expert on Africa and African affairs. He served on the Africa Subcommittee of the Senate Foreign Relations Committee for 16 years, acting as ranking member beginning in 1995, and as Chairman from 2001 to 2003 and 2007 to 2011.

He is a Fall 2018 Distinguished Visiting Lecturer and teaches a capstone seminar for International Studies, International Studies 601: “Negotiating Peace in the African Great Lakes Region” during Fall 2018 semester. Distinguished Visiting Lecturers provide a practitioner’s perspective on current affairs by teaching special topics courses, hosting public events, engaging with faculty, and sharing in the intellectual life of the university.