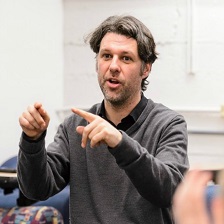 Professor Young is on sabbatical for the 2019-2020 academic year.
*Visit here to read full faculty profile of Stephen Young.

Young has two main areas of research. The first engages with economic geography and development studies to explore how young people in provincial India are resisting or accelerating processes of marketization. The second draws on work in urban and political geography to trace the emergence of new infrastructures of spatial and racial control in US cities since the postwar era.

One of his current research projects extends his historical work on race and urban governance by examining how digital technologies are currently being used to monitor and manage the “affective atmospheres” of the city. He is also beginning a new project that will pick up on his earlier interest in financial technologies and markets. In addition to examining initiatives that seek to make the livelihoods of poor populations more visible (e.g. microfinance), he is now exploring on the creation of financial spaces and practices that work to hide the wealth of elites.

On cities, race, and anticipatory governance in the US
S. Young & M. Bruzzone. Feeling the pulse of the city: Racial liberalism and the political geographies of    tension in postwar Detroit. Forthcoming in Urban Geography
S. Young, A. Pinkerton & K. Dodds 2014. The Word on the street: Rumor, race, and the anticipation of urban unrest. Political Geography 38, 1, 57–67
A. Pinkerton, S. Young & K. Dodds 2011. Postcards from heaven: Critical geographies of the Cold War Military–Industrial–Academic complex. Antipode 43, 3, 820–844

On economic change, inequalities, and youth enterprise in India
S. Young, S. Kumar & C. Jeffrey 2017. Beyond improvisation? The rise and rise of youth entrepreneurs in north India. Transactions of the Institute of British Geographers 42, 1, 98–109
D. Rodgers & S. Young 2017. From a politics of conviction to a politics of interest? The changing ‘ontologics’ of youth politics in India and Nicaragua. Antipode 49, 1, 193–211
S. Young & S. Kumar 2016. College entrepreneurs in India: The fortune at the bottom of a pyramid scheme. In N. Ansell & N. Klocker [eds.] Geographies of Children and Young People (London: Springer)